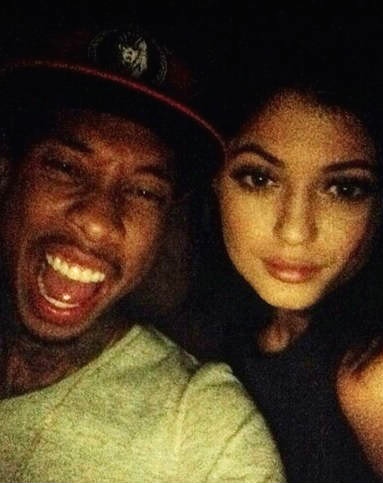 Tyga, 24, didn’t take too kindly to being called a “pedophile” for spending his free time with 17-year-old Kylie Jenner.

The two are currently in France together, further feuling speculation that they are more than just friends. Someone on Instagram questioned their age difference, saying he should be in jail.

The user @smartchik78 wrote: “Nasty a** pedophile..your career and family is worth losing over this Kardashian baby thot @kyliejenner…I hope @blacchyna takes you away from your son…you should be locked up.”

Tyga responded with this:

“@smartchik78 why u sound so hateful. U don’t know s*** bout my life but the fake s*** u read online. Worry about your sad boring life. U wish u can have a baby by a ni**a like me and live this lifestyle…let me guess no one wants u or ever attempted to spoil u and give u the world like I do for mines. Your ugly not just physically but in your soul. Never speak on my son.”

Meanwhile, TMZ is reporting that Kylie and Tyga were spotted together at England’s Gatwick Airport on Friday, then traveled on to Bordeaux, France and Geneva, Switzerland before landing in Athens, Greece, where Tyga had a gig Sunday night.

Seems odd that Kylie would go on tour with Tyga — if they’re just friends — but then we noticed the age of consent for sex in those countries:

The consent age is 18 under Federal and California law. Of course, there’s still no evidence they’re banging — and Tyga’s been adamant they’re NOT — but ya gotta wonder if they read up on international laws before departing … just in case.