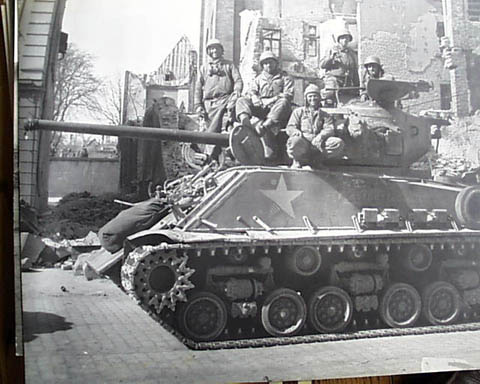 World War II (WWII) may seem like quite some time ago as depicted in the Sony Pictures film Fury starring Brad Pitt as the leader of a tank battalion.
However, one thriving survivor still lives to share his story. William McBurney, a 90-year-old WWII veteran, voluntarily enlisted in the war when he was 18 as he expressed it was what young men of that era in 1942 felt called to do among the masses. He was neither afraid nor excited, but simply felt it was what he was supposed to do.
McBurney became a part of the 761st Black Panther Tank Battalion—an all-Black battalion. Living as an African-American in the 1940s era proved to be a challenging time especially in the segregated south. Having had grown up in New York City, McBurney didn’t experience much of the segregation that was taking place in many states in the south. In New York City, he could go to and from wherever he desired. Those tables quickly turned once McBurney was sent to a camp in the south. He and the other members of the 761st Tank Battalion had thought people were joking when telling them that they couldn’t go to certain places and what they could or could not do. McBurney expressed, “we look at them like they were crazy…but we acted as advised and only went to the areas that we were told Blacks could go.”
Once deployed overseas, all of the young men were there for one reason: to fight for their country, the United States of America. The 761st Tank Battalion was a very successful group of young men having traveled across enemy lines further than others. Despite their great heroic efforts, they had to face more than one enemy—their fellow White servicemen. McBurney stated that when in England, the White servicemen from other battalions and infantry units had attempted to tell the local British communities not to talk to the Black ones in their all-black tanker uniforms. McBurney said, “We were coming into Europe to fight, to fight alongside them [White U.S. servicemen]. But they were trying to degrade us and bring us down before the invasion even started.” In other parts of their European deployment stations, their White counterparts went as far as telling locals that members of the Black tank battalion had tails, to insinuate the reference of African-Americans to compared to monkeys or other types of primates. However, it still didn’t stop the local women of those towns from flocking to this group of overshadowed heroes.
McBurney also shared that one of the first experiences he endured head on dealing with segregation was when captured enemy German soldiers were able to eat in the same cafeteria next to the White U.S. soldiers, whereas the Black U.S. soldiers had to go around back to another location to eat. These experiences were exacerbated once returning home from war. As many were being celebrated for their heroic efforts overseas, the 761st Black Panther Tank Battalion received no special accolades, which led to the returned soldiers not boasting about nor being proud of their accomplishments. Upon their immediate return, life continued on as if they had never left. Those who were from the racist south went right back into that despite returning home in uniform and wearing medals. McBurney shared that one of the members returned back to Georgia and was seen fraternizing with a White woman and he was hung in his uniform.
As we celebrate and honor William McBurney and the thousands of other war veterans, let’s all go see Fury releasing nationwide this Friday, October 17, 2014.
Read more at https://www.eurweb.com/2014/10/wwii-panthers-our-black-heroes/#Rg5rK8907E9eKHLI.99