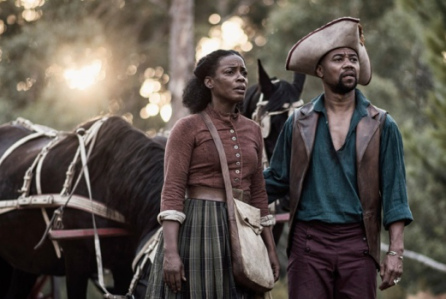 ”The Book of Negroes” director Clement Virgo had difficulty accepting the title when he read Lawrence Hill‘s novel of the same name.
“I had an aversion to a novel called Book Of Negroes,” Virgo said about the miniseries, which will air on BET in February during Black History Month, according to Deadline.
The novel and miniseries are both about Aminata Diallo, an African woman kidnapped from West Africa, sold into slavery in South Carolina and then, gains her freedom during the American Revolution — after of which she moved to England.
Nevertheless, even after he bought the novel, Virgo wasn’t too fond of its title. But he had a change of heart.
“I couldn’t imagine the novel being called anything else,” he said. “The use of the word in the novel and miniseries isn’t to provoke or disturb.”
The title refers to genealogy kept by the British Navy of slaves who fought for the red coats during the Revolutionary War. The British lost, but recorded each slave’s origin, destination and their job during the war.
“I told Damon that I see this project as The Wizard Of Oz,” Virgo said. “Just as Dorothy was pulled out of Kansas, Aminata is in Africa and then this twister of slavery pushes her out of her home, across the ocean and all she wants to do is get back home.”
Virgo tried to make the mini-series into a feature-length film in 2010, but international distributors felt it wasn’t fit for theatrical  audiences. Instead, it became a miniseries for TV with the help of Canadian (CBC) broadcasters.
Although films like “12 Years a Slave” paved the way for more movies about slave narratives, this time around it’s told from a slave woman’s perspective. Aunjanue Ellis stars as the female lead alongside Cuba Gooding Jr. and Louis Gossett Jr.
“It’s told from the female perspective with a sense of empowerment.  Through Aminata’s journey we see the strength of her character. I didn’t know anything aboutThe Book Of Negroes, or the slaves participation with the British and upon hearing this, it always upsets me when I hear about something I don’t know,” Gooding Jr. said.
He added, “like The Tuskegee Airmen, The Book Of Negroes is another upsetting moment for African Americans, when we have made a positive impact on the building of America, but our history hasn’t been told. Hearing this tale of strength moved me.”