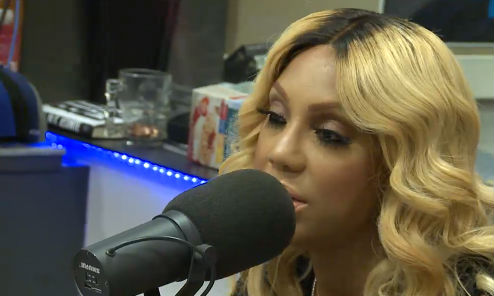 Tamar Braxton wants fans of “Tamar & Vince” to stop worrying. Although she and husband Vince Herbert fight like any other couple and things have been intense, they are not divorcing or separating.
According to the season three trailer, the couple seemed like they were headed towards a divorce. But she said not to worry about the trailer — they are in a good (enough) place now.
“We argue. Yes, it’s a lot to argue about. No. 1: we work together. No. 2: he’s my husband. No. 3: that’s my baby daddy. We have a lot to argue about,” Tamar told “The Breakfast Club.”
Clips show the couple arguing, Herbert being mad at Braxton for using foul language towards him and her walking out on him.
But she wanted to let her fans know she is not being physically abused in any way. They are a normal couple who argue.
“I ain’t that chick,” she said. “I can’t see it. I’ve been in an abusive relationship before…I am not that girl who you just gonna hit.”
Braxton said she understands sex is just sex sometimes, but her opinion was probably different before Baby Logan.  “When people get older, things change,” she admitted.
She added, “maybe I ain’t putting it down like I was. Maybe he’s not putting it down like he was. Maybe we’re not having the communication that we need to have to make our relationship the way it was. Sometimes things like that can make you closer and make you appreciate what you have,” she reasoned.
This is not to say she’s OK with an open marriage, but they have an understanding and a friendship.
She said, “at the end of the day, that’s my best friend,” she said. “I wouldn’t be here if it wasn’t for him, and that’s it.”
Watch the interview below: