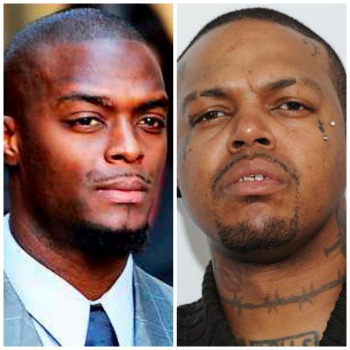 Plaxico Burress and DJ Paul will be featured on the season finale of “Celebrity Wife Swap” and from the looks of the trailer, there’s much drama.
This upcoming Tuesday episode will feature the Three Six Mafia rapper, the former NFL wide receiver, and their families.
The wives will switch homes and for the first part of the week abide by the rules of the house. And then the second part of the week, switch to the ruler.
Burress, his wife Tiffany Burress and their children, Giovanna and Elisha reside in New Jersey. Tiffany is a lawyer and businesswoman. Plaxico spends a lot of time in his man cave while Tiffany is left to run the household.
DJ Paul, his fiancee Majda and his son Nautica live in Las Vegas. His son Nautica is almost out of high school and he has little responsibility. This is while DJ Paul spends a lot of time in the studio and Majda hangs out. They hit “The Strip” after studio time until dawn.
As soon as the women switch, there seems to be drama. Burress and DJ Paul both look unhappy with the swap.
DJ Paul even called Tiffany out for being “boring.” Also, Majda turned Plaxico’s man cave into a family cave. Uh oh!
The drama will unravel on the season finale, which will premiere Tuesday, July 29 on ABC
Read more at https://www.eurweb.com/2014/07/plaxico-burress-dj-paul-switch-wives-on-celebrity-wife-swap-watch/#eAtGe7v07ubspPLw.99