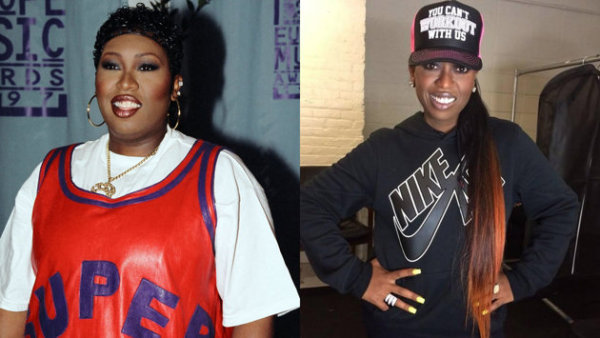 Get Ya diet and exercise on!

Missy Elliott has reemerged on the public radar with slimmer version of herself.

The 43-year-old rapper/singer-songwriter was on hand last week for a performance at the Alexander Wang H&M Collection’s New York launch, looking noticeably slimmer. Elliott’s appearance surprised those attending the event as she went into her hits “Get Ya Freak On” and “Work It.”

The entertainer took time out to post a picture of herself on Twitter wearing a “You Can’t Workout With Us” cap and Nike sweatshirt as she thanked Wang and H&M after the show.

Elliott’s performance marks her latest appearance on stage since she was diagnosed with Graves’ disease, a rare autoimmune disorder, in 2008. Since revealing the thyroid-affecting condition publicly in 2011, she has made a limited number of concert appearances.

Her situation was so bad that she admitted to People at the time that, “I couldn’t write because my nervous system was so bad—I couldn’t even use a pen.”

Elliott’s weight loss is part of a revised diet and exercise program meant to manage Graves’ disease, which has no cure. According to the Daily Mail, Elliott has lost almost 70 pounds since starting the regimen, despite not revealing exactly how much weight she lost.
Read more at https://www.eurweb.com/2014/10/missy-elliott-displays-70-lbs-weight-loss-at-surprise-performance-watch/#EvjGaZXjecKSBxi1.99