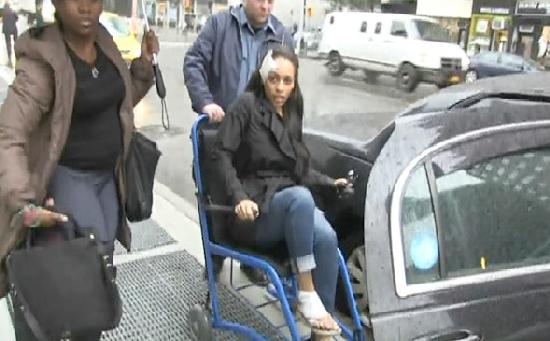 Earlier we reported that Melyssa Ford had been attacked by her “Blood, Sweat & Heels” cast mate Geneva Thomas at a taping of the Bravo series in NYC.

In the confrontation, Thomas allegedly hit Melyssa in the head with a vodka bottle which required a visit to the hospital by Ford. Thomas was arrested and charged with two counts of assault

Apparently Melyssa’s injuries were worse than initially thought as she was had to return to Lenox Hospital on Thursday. A TMZ cameraman caught up with her as she was being helped out of a town car and into a wheelchair.  Apparently, a head injury wasn’t all that she sustained during the brawl, as one of her feet were wrapped in an ace bandage. It’s being reported that she can’t walk due to several gashes under her feet from broken glass during brawl.

When asked what had happened, Ford responded: “I was attacked.”

When probed about what started the fight, Melyssa simply said: “I have no idea.”
Read more at https://www.eurweb.com/2014/10/melyssa-fords-injuries-from-attack-worse-than-originally-thought-video/#85MkMHRr3tJgqjHf.99