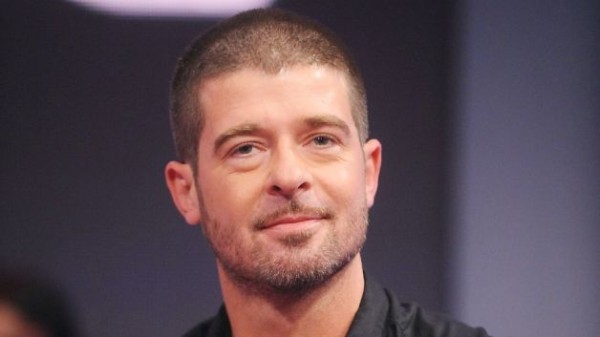 *Robin Thicke’s “moment of personal vulnerability” was exploited by lawyers for Marvin Gaye’s estate, according to Thicke’s attorney Howard King.
“Robin’s moment of personal vulnerability is being exploited in the hope of diverting attention from the obvious weakness of their legal claim,” King said in an email via his publicist.
King’s comments are the latest development in the continuing saga involving Thicke and the Gaye estate over Thicke’s hit single “Blurred Lines.”
The singer confessed in a deposition obtained on Tuesday (Sept. 16), that “Blurred Lines” producer Pharrell Williams was the one who actually wrote the popular tune.
“I was just lucky enough to be there when he wrote it,” said Thicke, who initially took partial writing credits for “Blurred Lines.” As we reported earlier, the singer also stated that he was high on alcohol and Vicodin during the writing process for the song as well as many of the interviews surrounding the 2013 single. So much so that Thicke claims he was so intoxicated that he was “quite surprised” when he read back some of the interviews.
“Every day I woke up, I’d take a Vicodin to start the day,” Thicke detailed. “And then I’d fill up a water bottle with vodka and drink it before and during my interviews.”
Despite, King’s claims, Gaye’s estate countered with claims that they did not bring Thicke’s personal issues into the case. “Mr. Thicke and his counsel did so in the attempt to avoid his prior admissions regarding “Got to Give It Up,” Gaye’s children stated in an email from their attorney.
The Marvin Gaye estate/Robin Thicke case stems from a preemptive lawsuit filed by Thicke and Williams in August 2013 that denied they stole samples of Gaye’s “Got to Give It Up,” according to reports.
The preemptive suit resulted in a countersuit filed by Gaye’s children Nona Gaye, Frankie Gaye and Marvin Gaye III in October.
A jury trial for the case is scheduled for Feb. 10, 2015.
Read more at https://www.eurweb.com/2014/09/lawyer-marvin-gayes-estate-exploited-robin-thickes-personal-vulnerability/#6d4SvtiTmylS7OAC.99