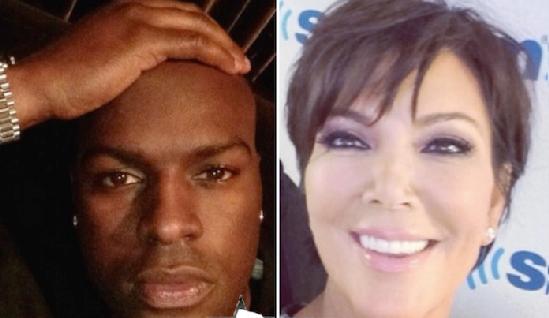 For those of you who’ve been following the breakup of Bruce and Kris Jenner, here’s the latest on Kris and what’s happening with her love life.

It appears that she’s yearning for chocolate these days and young-er chocolate at that. Jenner, 58, the mother of Kim and Khloe Kardashian, and her new man, Corey Gamble, a music industry executive, have been dating since August.

Apparently their romance came to light because snaps of the two having dinner in Sherman Oaks found their way online via the Daily Mail.

“I don’t know how anyone had those pics because no one was seated across from us,” he wrote in an email to Sandra Rose. “That worries me and I’m hoping it’s not a setup from Kris because I do really like her.”

And while Rose had Gamble’s attention, she was able to get even MORE info:

Sandra Rose: How did you two meet? Who approached who first?
Corey Gamble: “We met at Ricardo Tisci’s birthday bash. I approached her and found out we actually lived pretty close to each other.”

Have you ever dated an older woman before?
“I love older woman, that’s all I usually date. Though I can say I have never been with anyone over 52.”

Does Kim and Khloe approve of your relationship with Kris?
“No one actually knew about our relationship until [Radar Online] printed the story and pics. I am not sure how they feel about it. I have been knowing Kim for some time but she didn’t know I was dating her mother.”

He also spoke on Kris’ estranged husband Bruce Jenner and confirmed whether or not he’s interested in putting a ring on Kim  K’s mom.

Have you met Bruce Jenner?
“I have never met Bruce, but I do feel Kris still has feelings for him. That’s why I’m entering this with eyes wide open.”

What does your mom think of your relationship?
“I haven’t spoken about it with my mother, but I don’t think she would be pleased as Kris has quite the reputation in the media.”

Is this relationship a fling for you or do you feel a deep emotional attachment to Kris?
“I would like to see this relationship take it’s course on a deeper level. I do like her a lot but I also see that, like stated earlier, she has feelings for Bruce, so that worries me. I also want to make sure I’m not just a ploy for ratings because you never know.”

Oh yeah, just in case you think Gamble is dating Jenner for her money, he’s said to be a self-made millionaire with a degree from Morehouse. He’s also the co-manager of Justin Bieber.
Read more at https://www.eurweb.com/2014/10/kris-jenners-new-chocolate-man-corey-gamble-is-years-younger/#GjhDjABrCqDsi3JP.99