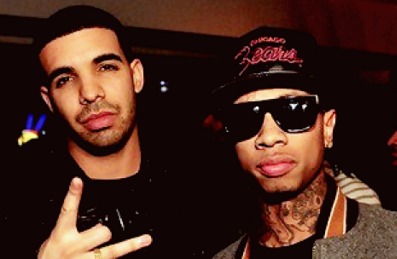 Recently, Tyga told Vibe he didn’t like Drake because he is fake. He said the only reason why he had a relationship with Drake and Nicki Minaj is because of Young Money.

Drake responded to Tyga’s comments in the most passive-aggressive way to get under Tyga’s skin. He liked five of Tyga’s ex Blac Chyna‘s photos on Instagram.

Chyna is the mother  of Tyga’s son. Drake had a thing for her in the past (and maybe even currently). He rapped about her on “Miss Me” in 2010. And Drake used this to exact his revenge.

“Call up King of Diamonds and tell Chyna it’d be worth the flight
I’ll be at my table stacking dollars to the perfect height
Work something twerk something basis
She just tryna make it so she right here gettin’ naked
I don’t judge her, I don’t judge her
But I could never love her ’cause to her I’m just a rapper
And soon she’ll have met another”

Talk about foreshadowing, according to Necole Bitchie. Exactly one year later, Tyga and Blac Chyna went public with their relationship.

Ultimately, the rappers most likely just have two very different personalities and are unable to be friends or have a mutual respect for each other because of it.

It appears the drama between Drake and Tyga has taken another turn.

In video that showed up today online, Dake is seen going into bad-ass mode outside a strip club in DC. It appears that 4 or 5 people are trying to hold him back as attempts to make his way inside to approach someone. But if that’s the case, why?

Well, according to  the rumor mill, some of Tyga’s associates attempted to jump Drake’s DJ and one of his best friends, Future The Prince. That was apparently Drake’s motivation.
Read more at https://www.eurweb.com/2014/10/drake-is-very-passive-aggressive-with-tyga-beef/#zZa85muvD96Rqqhy.99