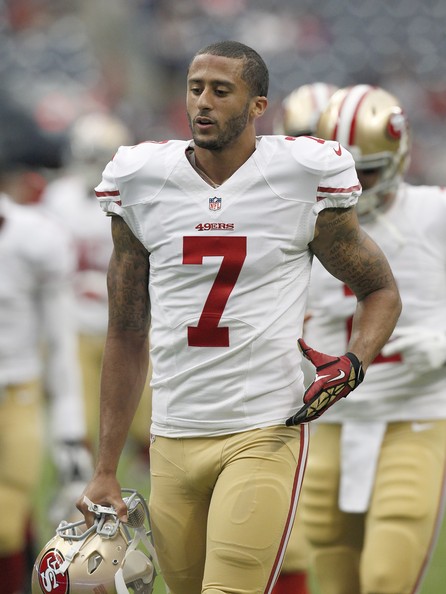 Fox Sports is reporting that it was indeed the N-word that San Francisco 49ers quarterback Colin Kaepernick uttered during the team’s home opener that led to an $11,025 “inappropriate language” fine from the league.
However, Kaepernick is still denying that he used any racial slur during the 28-20 loss to the Chicago Bears last week at SF’s new Levi’s Stadium.
“I didn’t say anything racially derogatory to him,” Kaepernick said of Bears defensive end Lamarr Houston, the player nearest to Kaepernick when the penalty flag was thrown. (Scroll down to watch.)
A Fox Sports report cited an unnamed source as saying that an on-field game official heard Kaepernick use the N-word on the field against the Bears.
Kaepernick denies saying anything, let alone a slur. He is appealing the fine levied against him.
“I’ve said that in the past, and I’ll say it again,” Kaepernick said of his steadfast assertion that he didn’t say anything to Houston or anyone else. Houston said that he didn’t recall hearing anything from Kaepernick.
Field video shot by KPIX-TV showed that Kaepernick, indeed, said something, though no audio could be heard.
“I talk on the football field, yes, I do,” Kaepernick said Sunday, when pressed on whether he said anything.
Side judge Laird Hayes called the penalty after Kaepernick had an exchange with Houston following a fourth-quarter interception.
Read more at https://www.eurweb.com/2014/09/colin-kaepernick-denies-using-n-word-plans-to-appeal-11k-fine/#AmW1CwpEoyo76ml0.99