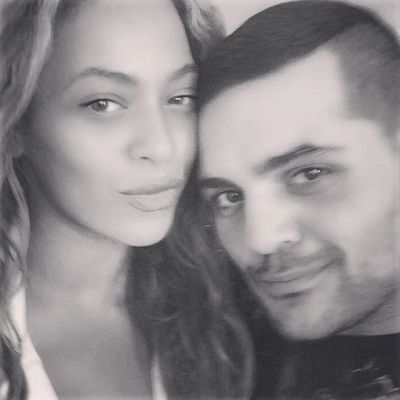 Although he’s known for outfitting some of the best known black female celebrities, Michael Costello is not getting any love from Beyoncé fans after he allegedly used a racial slur while responding to a situation with an up-and-coming designer.

The drama stems from a payment given to designer Maxine James from Costello’s partner Stephanie Costello for one of her dresses two weeks ago. 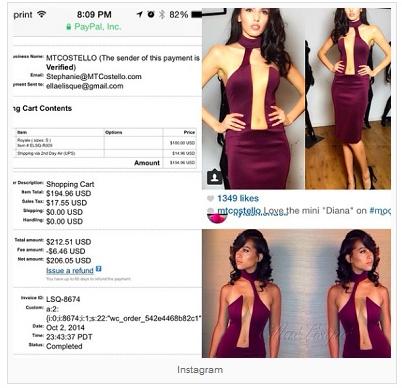 James’ excitement over being noticed and compensated by Costello turned cold after she saw her dress posted on the Mtcostello Instagram page without any credit given to her. Adding to that was that the dress was featured on the page as if it was a Costello creation.

James reacted to the situation on Instagram as she wondered why someone like Costello would resort to stealing someone else’s creation.

“It’s so disheartening I couldn’t help but shed a tear… Him as a designer should know first hand how heart breaking it is for ppl to take something you worked so hard on …..It’s like why? Who does that? I mean we ALL get inspired from some where but it is completely unfair to take someone’s EXACT design and EXACT dress at that and claim it as your own….,” wrote James. “@michaelcostello You are already a well known designer you design dresses for TOP celebrities… Why would you do something so low? I put so much into my brand … I eat sleep breath it… I paid for so many mistakes while making this design I went through so much to make it perfect …for it to fit perfectly… patterns..grading …cut… Production …photo shoots ALL OF THAT and you literally take my EXACT DRESS and claim it as your own … I tried to reach out to you and you block me ? Like seriously … It’s extremely disheartening I TRUELY did look up to you as a designer…you were one of my favorites….I hope this lasts you for a life time … because God will never continue to bless someone who does evil malicious things like this…. Period”

James’ post immediately resulted in a slew of responses directed to Costello’s Instagram, asking why he would steal the young designer’s work. Costello apparently got so fed up with questions that he posted a response to one of the people, calling the person a “n—er” while making sure his experience with Beyoncé’s was known.

“Your just probably a dumb n—er defending her,” the former “Project Runway” constestant allegedly posted. “I am royalty b—h! I dressed Beyoncé! Who are they gonna believe!” 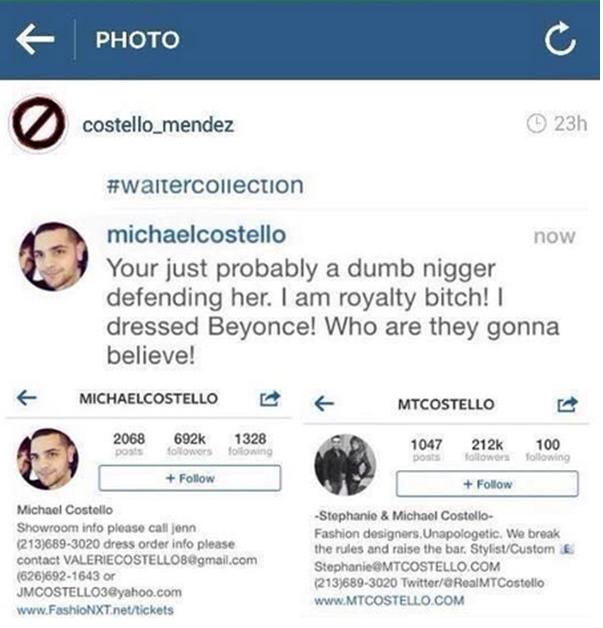 That obviously didn’t go over well. In response, Beyoncé’s fans went in on the singer’s stylist Ty, who ended up getting requests on her Twitter and Facebook let go of her association with Costello. In addition to Beyoncé, Costello has dressed Ashanti, Tamar Braxton, Gabourey Sidibe, Keri Hilson, Meagan Good and Christina Milian. The designer, who uses black models in his shows, created 24 handmade custom designs for Beyoncé and Jay Z’s “On The Run Tour” as well as recruited Skylar Diggins to walk in the finale of his Spring/Summer 2015 collection recently during Los Angeles Fashion Week.

Costello finally spoke out on the drama via a statement that labeled the screenshot of the alleged “racist” comment as a fake. The following is the celebrity designer’s statement:

“The hurtful screenshot circulating is fake and does not represent my views on society, nor do I condone the use of such a terrible term. It deeply saddens me that an individual would go to such lengths at an attempt to demean and misrepresent my character. My designs are centered on accentuating the inherent and natural beauty found in EVERY woman. My career would not be where it is today without the support of individuals from all walks of life.

We are currently looking into this urgent matter to identify the culprit. At this time, we have reason to believe the fake image was edited and circulated by a disgruntled intern who is no longer employed at Michael Costello. Once the individual is fully identified, we intend to pursue legal action.”

For more on the Michael Costello’s alleged “racial” Instagram comment, including a response from Stephanie Costello and Chrissy Teigen, click over to Necole Bitchie or Madame Noire.