New Orleans  – I envy residents of New Orleans. It seems like the concerts and festival season are all threaded together. There are so many events taking place throughout the City on any given day, as well as various events, concerts festivals taken place on the weekends.

Jazz in the Park featured a number of stellar New Orleans musicians. An eclectic genre of musical styles greeted concert goers on each Thursday of the series, including soul, funk, brass, indie rock, and hip hop. The concerts take place from 4:00PM-8:00PM in the world famous Louis Armstrong Park. Marquee lights lit up the entrance of the Park that also features a statue of the late great Louis Armstrong with his trumpet. 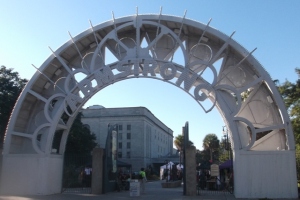 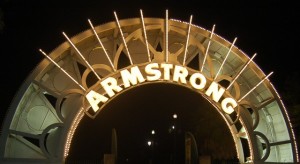 The October 16th concert got underway New Orleans style. The Sudan Social Aid and Pleasure Club and All For One Brass Band strutted their stuff as they led the crowd in a vibrant and colorful Second-line that snaked around the park. 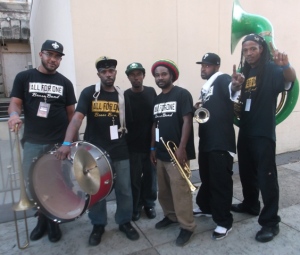 The live entertainment portion of the show got underway with Warren Easton High School Marching Band. These Marching bands are another main stay of New Orleans culture.

Vocalist Erica Fall came up next to showcase her sultry, soulful vocal styling’s on the following tunes “Encouragement,” “Rollin” in New Orleans,” “Rock Steady” by Aretha Franklin, “Better Days,” “It’s Been Good,” “Why Do You Lie,” and “You Can’t Come In.” 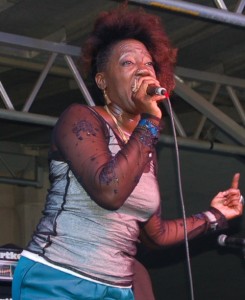 Corey Henry and Treme Funktet were the headliners for the concert. With the name Funktet, the crowd and I knew that we were in for a solid set that would be upbeat, energetic and rhythmic, that easily propelled the dancers out of their seats. One couldn’t help but to move to the grooves laid out by the band on the following tunes Red Hot Momma,” “Get the Money,” Do It Fluid,” “Shake Everything You Got and “Karate.” The band continued with “Voodoo Child” with guest vocalist Erica Falls. 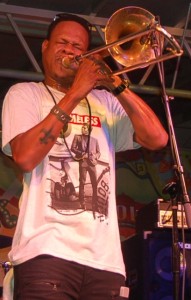 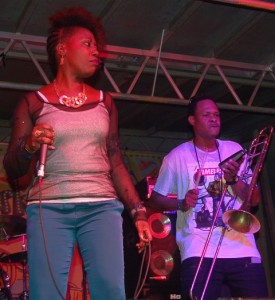 Additional activities in the Park consisted of food, drink and craft vendors, as well as the active, engaging Kid’s Craft Area. Special mention to Ms. Karen Crawford for her excellent service in the Artist/VIP Hospitality Area.

People United for Armstrong Park and music lovers has proven that the Jazz in the Park concert series is another wonderful, signature event for the Crescent City of New Orleans, as evident by the rousing response to all of the musicians and entertainers appearing throughout the series, and on this magical evening.

Mission Statement: We are proactive citizens sowing seeds in sacred ground to produce opportunities to preserve the past, promote the present and endow the future culture-bearers of New Orleans. We want to coordinate and collaborate with anyone with an interest in Louis Armstrong Park to catalyze the park into a premier hub for the city’s cultural economy.

We aim to connect individual in the community to their culture and history by:

Ricky Richardson is a Southern California based writer, music reviewer and Photographer. Contact him via: liltampared@netzero.net
Read more at https://www.eurweb.com/2014/10/2014-jazz-in-the-park-new-orleans/#iIO8utTTTkCAyaik.99